So I tried out for a spot on Pink Cat Studios design team and found out this week that I didn't make the cut. It's funny, I'm more disappointed than I thought I'd be (could also be due to a crappy week and a half before this news:) ). At least I'm proud of myself for trying. So, on to the cards I made for applying... 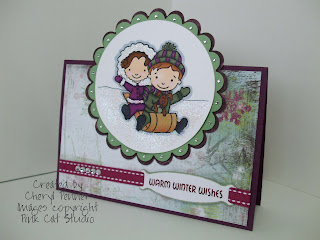 The images were colored with copics and cut out with nestabilities. A self-adhesive gem was put in each scallop and a row of them on the ribbon. The sentiment label is also from a nestabilities die. 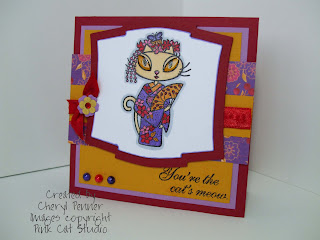 This one looks so cool IRL. I colored the image with copics and then went over it again with Spica glitter pens, so the Kimono is really shimmery, it looks just beautiful! (and I'm not being biased AT ALL!) The dew drops were colored with copics so that they matched the Kimono. 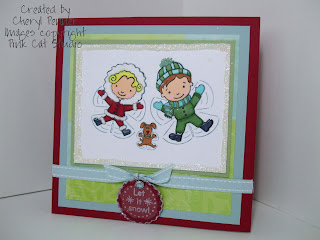 My original plan with this one was to do a tilt card, so that Billy and Lily would move and look like they were actually making snow angels, but their heads moved also and it looked funny, so I changed it. Billy and Lily are colored with copics (big surprise, I know!) Billy's mittens, scarf and the top of his hat were flocked with matching flock. The trim on Lily's outfit was stickled and flocked, and both pairs of boots were covered with diamnod glaze so they look like shiny rain boots. The tag was stamped on acetate with white stazon and then sprinkled with dazzling diamonds glitter for shimmer and sparkle. I cut the tag and the red tag behind it with a scallop circle nestabilities and trimmed it with more glitter! One can never have enough glitter:) 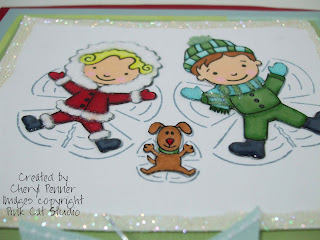 On the edge of the white piece, I put a line of tombo multi glue (I had just gotten it that day and had to try it out) and dumped (technical term) some SU! Dazzling diamonds glitter on top and let it just sit and soak in. I love the look it created.
Wow! I don't know if I have ever been that long winded!
Have a great weekend! I'm hoping ours is quiet and non-eventful!

Cheryl your cards are all winners so it's their loss. But I love your attitude...you can't win if you don't try. I think being on a design team is wonderful but hey you have all of us on your team and that's more satisfying! Pat

I think your cards are fabulous. Have a great day!

Cheryl, your cards are all fabulous!! Thank you so much for applying for my DT. I know it's hard to put yourself out there and I'm really honoured that you took the time to apply for my team. I posted one of your cards on my blog today :) Enjoy the rest of your weekend!
Hugs,
Melissa

I love all your cards! They are fabulous! It is definitely their loss.