I just saw this on Dawn's Blog and had to share....grab your kleenex, you'll need it!

A son asked his father, 'Dad, will you take part in a marathon with me?' The father, despite having a heart condition, said 'yes'. They went on to complete the marathon together. Father and son went on to join other marathons, the father always saying 'yes' to his son's request of going through the race together. One day, the son asked his father, 'Dad, let's join the Iron man together.' To which, his father said 'yes' too. For those who don't know, Iron man is the toughest triathlon ever. The race encompasses three endurance events of a 2.4 mile (3.86 kilometer) ocean swim, followed by a 112 mile (180.2 kilometer) bike ride, and ending with a 26.2 mile (42.195 kilometer) marathon along the coast of the Big Island. Father and son went on to complete the race together. View this race video below .

I don't know how to embed the video properly, you'll have to watch it on Dawns blog, you won't be dissappointed! 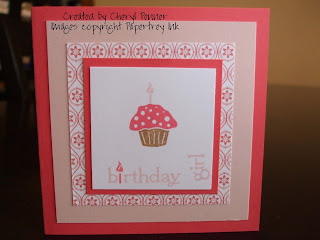 Alrighty! We've survived dance week and I thought I'd post something quick! This is a card I did in april when I first got this set from Papertrey. It uses their coodinating ink and cardstock!
Posted by Cheryl at 9:14 PM 6 comments:

I thought I'd let you all know that I haven't fallen off the earth, we've just been drowning in dance practices for the past 2 weeks and this week is filled with dress rehearsals and shows! I'll post next week, but for now I'm just too darn tired to even see straight!
Posted by Cheryl at 7:28 AM 3 comments: