The next 2 Pink Cat Studio images in the release are the kitty in the christmas tree and the kitty with the fish bowl. Here's what I came up with: 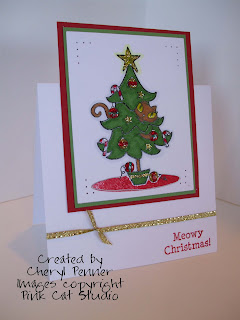 I love the kitty in the christmas tree! I think she's so funny! She is colored with copics again and then all the ornaments were decorated with stickles and once that was dry I gave them a thin layer of diamond glaze. Copic markers are perfect for this because they don't run AT ALL when you put stickles or diamond glaze over them! I layered the image with the green and red cardstock and then attached them to a tent style card. At the last minute I decided to try my hand at piercing the corners and messed up the last one! Go figure! Despite my mess up I love how sparkly the ornaments and shiny the candycanes came out! 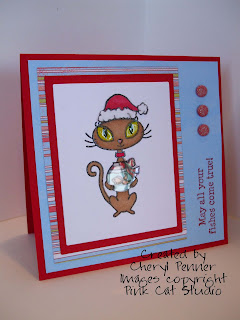 The next image is the Kitty with the fish bowl. This is another image in the set that can be either christmas or non-christmas. The santa hat in the first picture is cut out and attached to make it a christmas card. 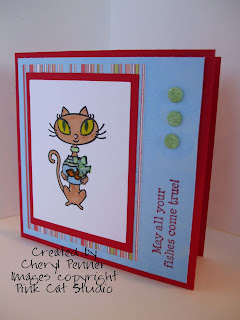 I intentionally used exactly the same papers, colors and layout in both cards to show you how easy it is to change it into a christmas card! She is colored with copics and the eyes are covered with diamond glaze (I think this really makes them pop and looks super cool!). The christmas kitty is flocked the non-christmas isn't (for no other reason than to show you that it's optional!) 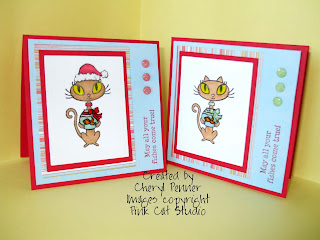 The second I saw this image I wanted to do my bext to make the fishbowl look glass! So I stamed it with stazon onto a piece of acetate, cut it out and attached it to the card with diamond glaze. I love how that glass-like look is captured in the first picture! I tried to re-create that with the other pics, but that wasn't happening! I have since tried just covering the fishbowl with diamond glaze and it aslo works just as well! The brads are sugared brads (I think they are by doodlebug!) 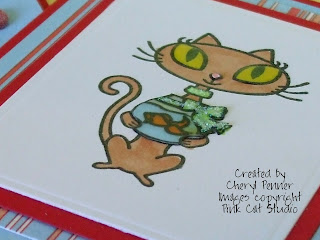 Cute! I love the piercing on the first one (I don't see any mess up!) and I love how you did the fish bowl on the second one! Great idea!

Cute cards Cheryl. I guess you like kitties. All are very cute cards. Pat

Great job on your cards Cheryl!

This is so cute . Love the kitties.

Those cats with the fish bowl are the very cutest cats I've seen.